Hints and Tips to tackle Butchery at Home

In a day and age where we’d like to save money but also know where or food comes from, we’ve compiled a little list of tips you can do at home to meal plan more effectively & save a few pounds by buying bigger joints or whole primals of meat then processing them into smaller roasts or individual cuts.

Starting with Lamb, a leg can be cut into 5 main pieces.  The shank, ideal for slow cooking.  The rump, a lean piece of meat with great fat covering, perfect for serving two tied as a roast or even on the bbq when cut into steaks.  The silver side, another lean piece of meat perfect for a small roasting joint, feeding 4 people for a Sunday roast quite comfortably.  The topside, mostly a large single muscle, ideal for quick cooking as individual steaks or can be tied and roasted whole.  Lastly the round, this muscle group has several muscles in it, great for roasting as a joint, dicing for casseroles & stews or mincing but most commonly this is where the leg steaks are cut from.

The bones themselves have great use with bone marrow content, making delicious sauces & broths.  The leg itself consists of the three main bones, the aitchbone, femur bone & shank bone.  Removing the aitch bone can be a little tricky but very rewarding to do yourself! The aitch bone is where the pelvis has been split down the centre, one half of it with a ball and socket joint where the top of the femur bone sits.  To remove the aitch bone, start with the small flat piece of bone you can see by running your knife as close to the bone as possible flat to the face of it, slowly freeing the meat from the bone.  Once you’ve traced this flat piece of bone you’ll be able to see the start of the ball and socket joint.  Cut behind the top of the ball of the leg bone, freeing it from the socket.  This will allow you to be able to trace alongside the rest of the aitch bone finally freeing it from the leg.  This bone is great for broth & stock, if you’ve missed any meat, you can always trim this off after for mincing or stewing.

Now you’ll have the rump at the top of the leg exposed, bone-free and ready to remove.  Cut a straight line across the lamb leg, just above the femur bone at the same giving you a roughly rectangular cut rump.  This can be tied up ready for roasting or wrapping in clingfilm to freeze for future use.

Next, to remove the shank, use your finger to locate a small dimple above what is effectively the knee cap on the front of the leg.  You’ll feel a small indent between the shank bone & femur, make an incision here across this indent, exposing the joint.  Bend the shank back on itself so you can access the joint, cutting between the bones & then out the other side, use a sharp knife to cut a nice straight cut through the meat, removing the shank on the bone in one nice piece. 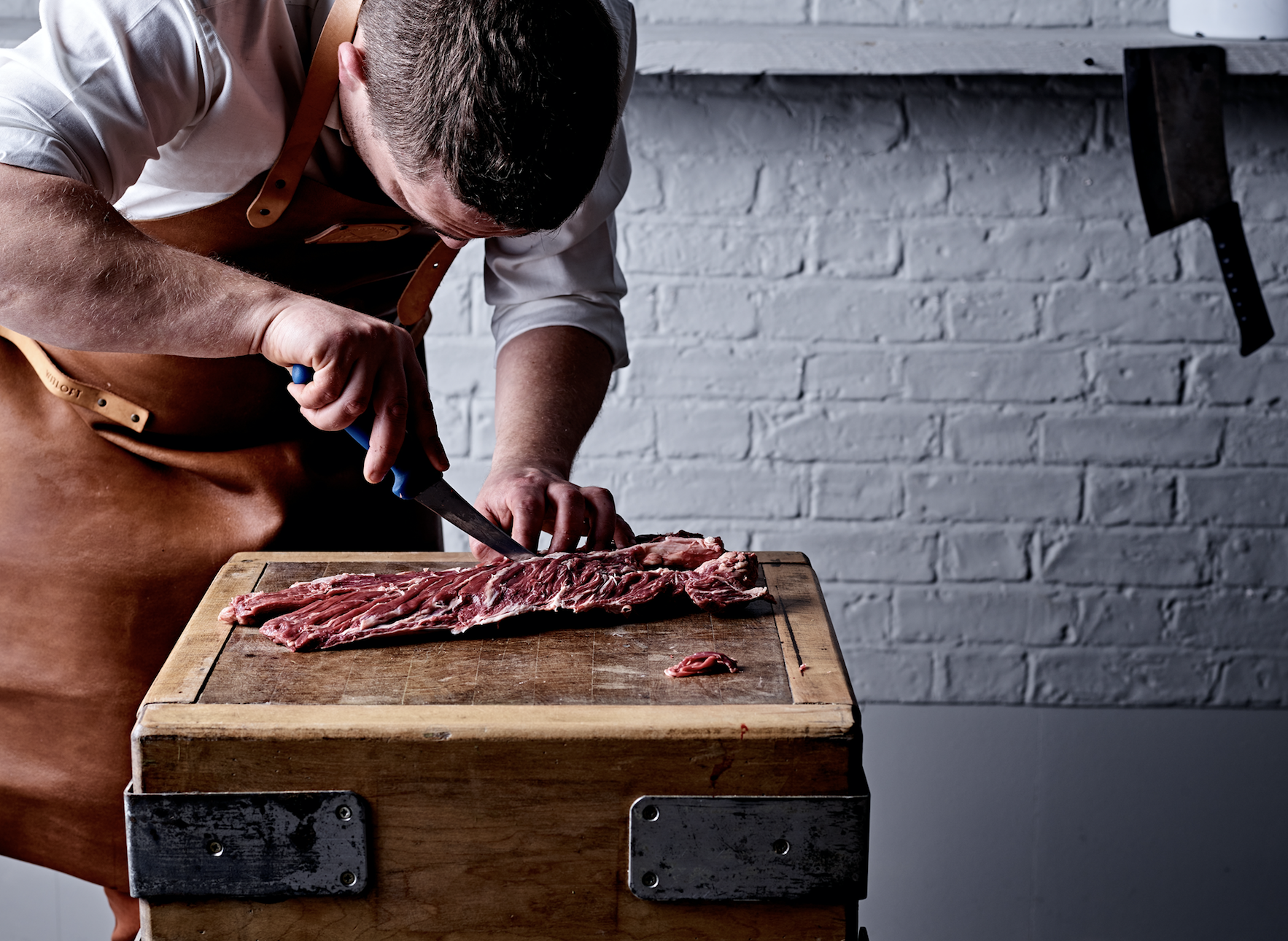 Now what you’ll be left with on the bone is the topside, silverside & round.  The first muscle to remove is the topside, just above the kneecap you’ll be able to see a natural outline of the topside.  It will run from the top of the knee cap to the top of the leg, insert your knife to expose this natural seam.  Trace this seam with your knife to the very top of the leg, using your fingers to feel this natural guide.  Once you’re at the top, you’ll now need to trace the seam across the leg to free the topside completely.  You’ll have a large fist-shaped cut of meat mainly compiled of two muscles.  This cut can be tied to roast as mentioned or even cut into steaks.

Next, you’ll remove the femur bone, this should quite visible now which will be a big help.  Begin by tracing your knife around the top and bottom of the femur bone, freeing it at each end.  Next run your knife up the length of the bone, keeping as tight to it as possible, all the way around until the bone can be cut free.  Lay the leg skin side down on your board. There should be a fairly obvious vertical seam, separating the round from the silverside.  The round being more of a ball-shaped muscle group & the silverside being a large & smaller long tubular muscle together.  Cut down this seam to give you both cuts.  Most commonly the round is cut into leg steaks you’re probably most used to seeing, the silverside can be cut into two joints however.  The salmon fillet which the tubular-shaped muscle is running beside the silver side, this cut is super lean, great for a quick dinner & is very tender. The silverside itself is a brilliant roast, tie it with butchers string & use for a Sunday boneless roast that has great flavour.  All the cuts apart from the shank are best served pink, the muscles although used for locomotion are very lean & tender, cooked medium they will be packed full of flavour & tenderness.

None of these cuts mentioned requires a saw, all can be done with a boning knife, making this a simple process to do in your kitchen.   Butchery at home is a skill well worth learning as its somewhat therapeutic & super rewarding.

The same process applies to pork leg which means these cuts can be taken following the same seams as found in the lamb leg.  The pork leg being bigger means there are more uses for the smaller muscle groups.  Such as turning the topside into a gammon, this can then be cut into steaks or cooked whole.  The round into leg steaks that could be tenderised & flattened to make Milanese, an Italian dish with breadcrumbed pork flavoured with parmesan, rosemary & thyme.  The silver side can be roasted for a great Sunday meat, keep the skin on for crackling!  Whilst making a gammon, you could also brine the ham hock, using this as a base for soups, stews & pies.  Any trims can be minced or sliced into strips for stir-fry’s.

Beef rump is an excellent muscle group to find some interesting flavoursome cuts & money-saving steaks.  The muscle group itself is quite simply a huge version of the rump in the lamb leg.  The muscle group being bigger means we can separate out some of those smaller muscles that were in the lamb into steaks or joints in the beef rump.  Some of the cuts you may be familiar with already are the picahna, the rump cap.  A great steak with plenty of flavour due to its texture a rich creamy fat covering.  The tri-tip or rump tail is also another tasty steak with great texture.  Often seen smoked on a grill to a nice medium rare then thinly sliced, this steak is about 1.5kg in size depending on the size of the animal, perfect for sharing with friends & family.  Rump barrel is another inexpensive & underrated cut.  Incredible tenderness & minimal fat covering.  These from our retired dairy cattle can have beautiful marbling from a grass rich diet.  After seaming out these cuts the other muscles within the rump can be tied as roast & cooked in the oven until pink, served with all the trimmings.

The economies in doing you’re butchery at home can save you money but it also it’s a wonderful thing to do when you have the time.  Pushing yourself to learn a new skill, sharing what you’ve learnt with others whilst also preparing a wonderful meal to share with friends or family. 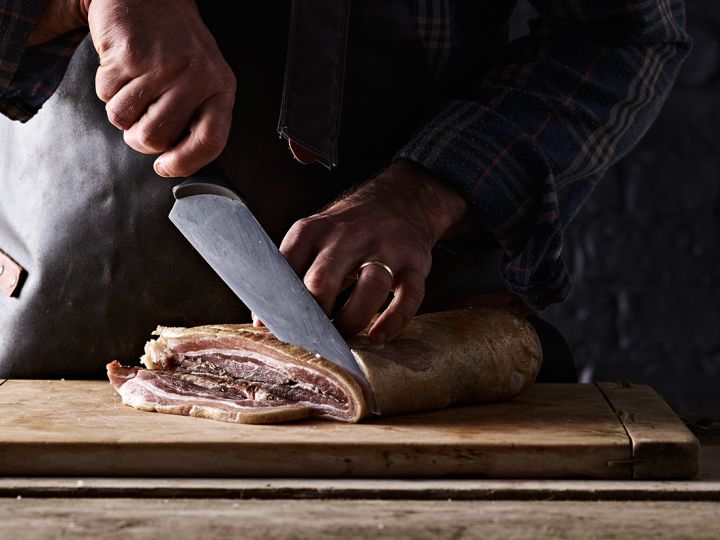 How to Make a Bacon Cure

Close your eyes and think of the perfect Sunday morning: soft buttered bread, sizzling bacon and a cup of strong coffee. That can’t be beaten. 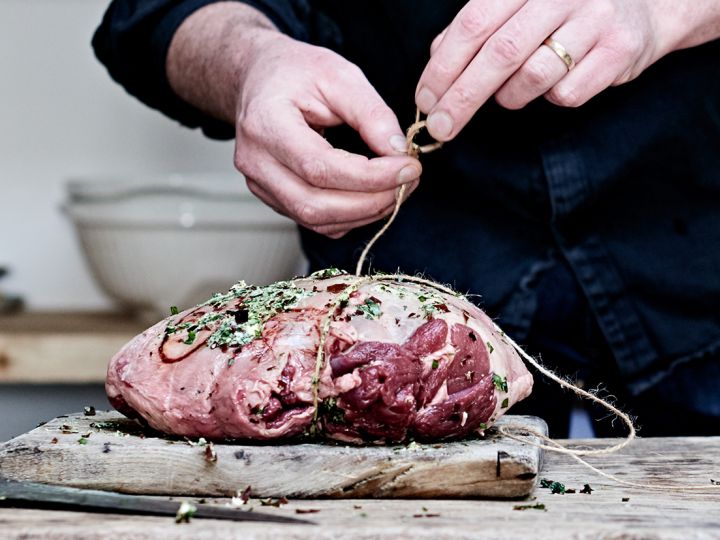 How to Tie a Butchers Knot

It’s possible you’ve never taken much notice of them, but well-tied butcher’s knots are tremendously useful when it comes to presenting and cooking joints. 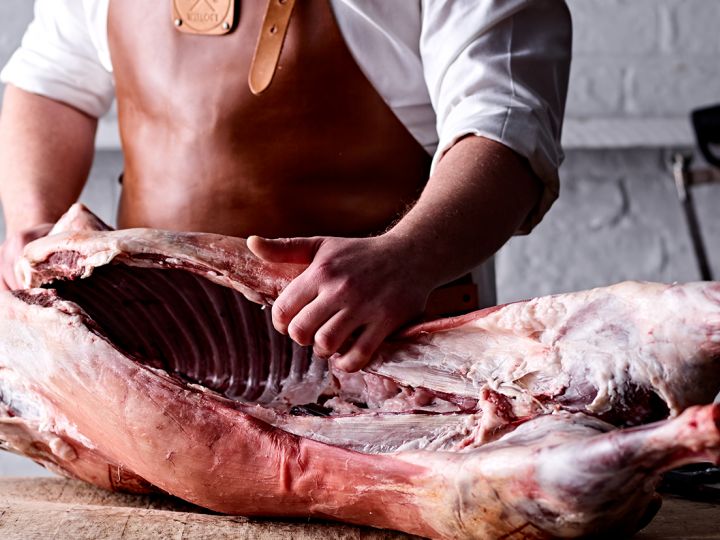 Hung, aged, dry aged, matured – there are many terms used to describe how old your meat is and how it’s been handled before butchery