Next day delivery UK mainland 2382 reviews 4.75 out 5 rating Award winning produce
Back to August
Back to Articles

Of all meat, chicken is the one upon which the spotlight of public attention is most often shone. There’s a lot of conflicting chatter out there about what does and does not happen on chicken farms, and what is and is not ethical.

Labelling and classification don’t really help the consumer. What’s actually meant by ‘free range’, ‘barn reared’ or ‘caged’? And what do these descriptions really tell us about the conditions in which the birds have lived?

Here at Coombe Farm Organic, we believe that when it comes to meat, purchasing organic is an ethical choice as much as a taste decision. By buying poultry reared to the Soil Association’s standards, you’re assured that the birds have been farmed to stringent welfare standards in regularly inspected facilities. ‘Free range’ encompasses an array of farming methods and is wide open to interpretation; organic is strictly regulated and offers poultry a quality of life not assured by other systems.

That’s why we work with a top-quality local organic producer. It gives our customers and us the assurance of knowing exactly how our chickens are reared and the peace of mind that every bird is traceable.

The factors you might consider when choosing between organic and conventionally reared chicken cover a range of angles. Is the meat good for you? Is it humane? How does it impact on the environment? It’s a complicated question, but there are some very clear issues to take into account.

Ranging and Housing
Conventional chicken farms are under no obligation to allow their birds to freely range. This often means that they’re reared in huge flocks in sheds without natural daylight. The focus is more on cost efficiency and profit margins, less on welfare.

In a crowded environment, the birds have little or no opportunity to follow their instincts to peck, scratch, flap, run, perch and take dust baths. As the birds are stressed, aggression and bullying are common. And when illness strikes, it can rip through a whole batch of birds in no time.

All animals are programmed to roam freely in an open area – thriving in the warmth of the sun and foraging on grass. While chickens can’t survive wholly on grass, having it in their diet gives them a healthy digestive system. Though playful, free-ranging chickens feature in many advertising campaigns, for most intensively reared birds their reality is a tightly packed barn, artificial light and quick-as-possible growth up to the desired weight.

Poultry reared to organic standards must have ready access to pasture, so the birds can follow their instincts and graze on fresh grass. They live in flocks of limited size and maximum stocking densities mean they have plenty of space.  They eat natural, organic food that’s free from GM ingredients and contains absolutely no chemical growth promoters. We’re believers in the notion that you are what you eat, so we care about what the meat we eat has eaten, too.

Drugs
In line with traditional and natural farming practices, organic producers are forbidden from ‘blanket treating’ their birds with drugs of any description. On intensive chicken farms, birds are systematically dosed with antibiotics – often by way of their food and water – whether they’re ill or not. It’s a prevention-rather-than-cure philosophy. Bacteria thrive in dense flocks, so as there’s a good chance the majority of birds will get an infection at some time, they’re dosed upfront, in anticipation.

When animals bound for the food chain are given medicines, the law demands a ‘withdrawal period’ that allows all traces of the drug to leave their systems before slaughter. Even with this precaution in place, we’re a little uneasy about the idea of eating meat from animals that have been fed antibiotics throughout their lives. In an organic system, the majority of birds will never receive antibiotics. And those that do will be subject to double the withdrawal period recommended by drug manufacturers.

When medicines are given on an organic farm, it’s always on a case-by-case basis, with welfare in mind and under veterinary advice. Only certain drugs are permitted by the Soil Association. Luckily, the chicken farm we work with is set in the rolling Devon countryside, surrounded by vast open spaces and blown through by blustery winds. This isolation and good ventilation, coupled with distance from other poultry farms, means infections are very rare and always manageable. 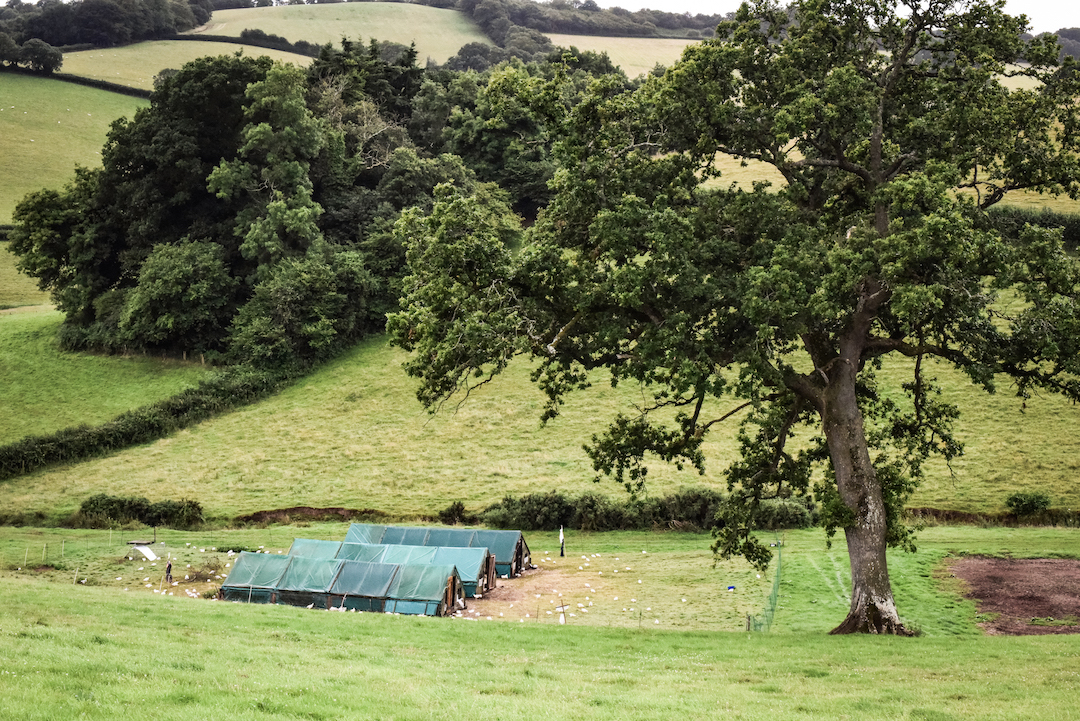 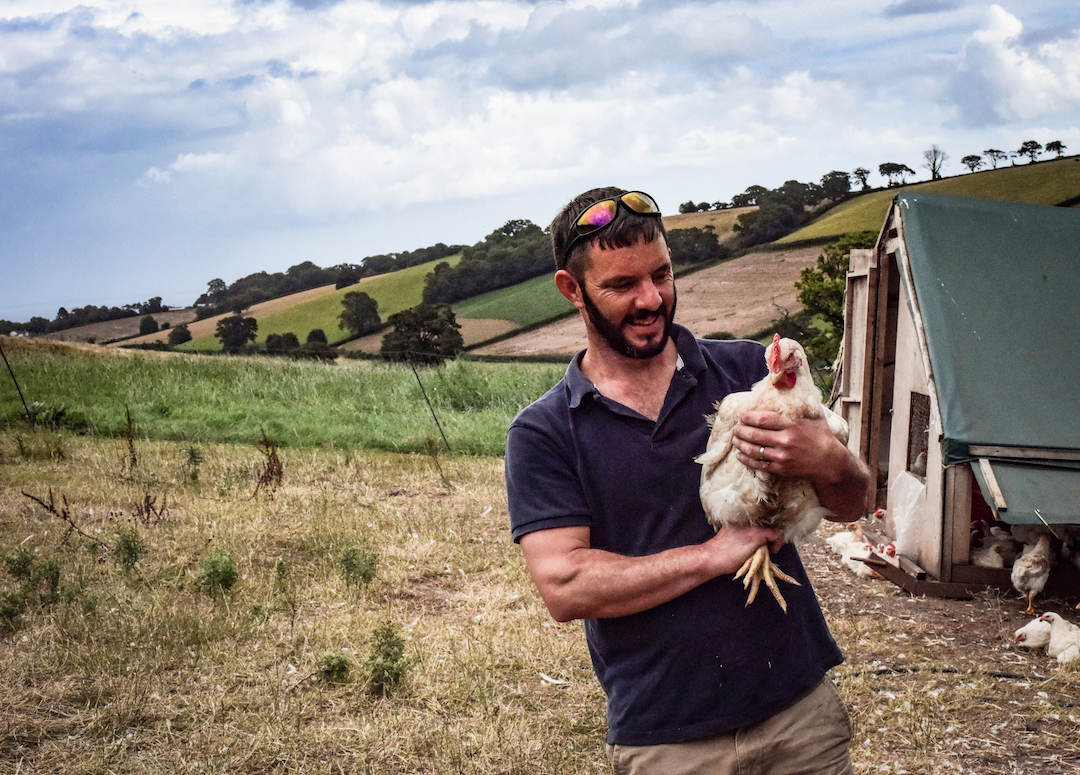 Slaughter age
For intensively farmed chickens, it’s all about speed. In close quarters (where exercise is limited) and with constantly available food, birds gain weight at an unnaturally rapid rate. Organic birds are more leisurely, their muscles grow strong as they roam around, scratching and flapping. They eat less than their intensive counterparts as they’ve got other things to distract their attention.

The food eaten by conventional birds is highly concentrated and grain based. Ingredients include high-protein imported soya beans that are added to promote fast growth. Rapid growth means farms can turn around more batches of chickens and earn more money. It makes economic sense, but welfare and quality suffer.

Organic farming is on a go-slow when it comes to growth. Birds mature at the speed nature intended; so organic farmers necessarily produce a smaller quantity but better quality of birds throughout the year.

Barn-reared chickens are killed at between five and seven weeks of age, all weighing in at standard supermarket sizes. The killing age for organic chickens is 10 weeks. In an organic system, it’s very difficult to ensure all of the chickens in a batch will achieve the same weight at the same time (or at all), as they grow naturally, choosing when and how much simple cereal food they consume.

Does organic chicken taste better?
There’s no scientific way of proving whether organic chicken meat is tastier than its intensively farmed equivalent, but we think it does. What is certain is that purchasing and consuming organic produce is a lifestyle choice. By choosing organic you’re making an informed decision that gives animals high-welfare lives, free from unnecessary drugs and with the ability to follow their natural instincts. It’s also reassuring to know that organic systems are monitored and audited by the Soil Association Organic to produce, in our view, the healthiest and most delicious meat possible.

Here at Coombe Farm being organic means we’re very careful about how we manage the land. Real science goes into what we feed our livestock, so that means we use soil analysis to determine what each individual field needs to make it healthy and fertile. To earn our Soil Association accreditation, our animal feed is organic, free from additives and containing no genetically modified ingredients. Because we believe Mother Nature knows what she’s doing, we don’t use chemicals or pesticides on our fields. This ensures the grass our animals eat is clean and pure and it also makes our farm an excellent wildlife haven. 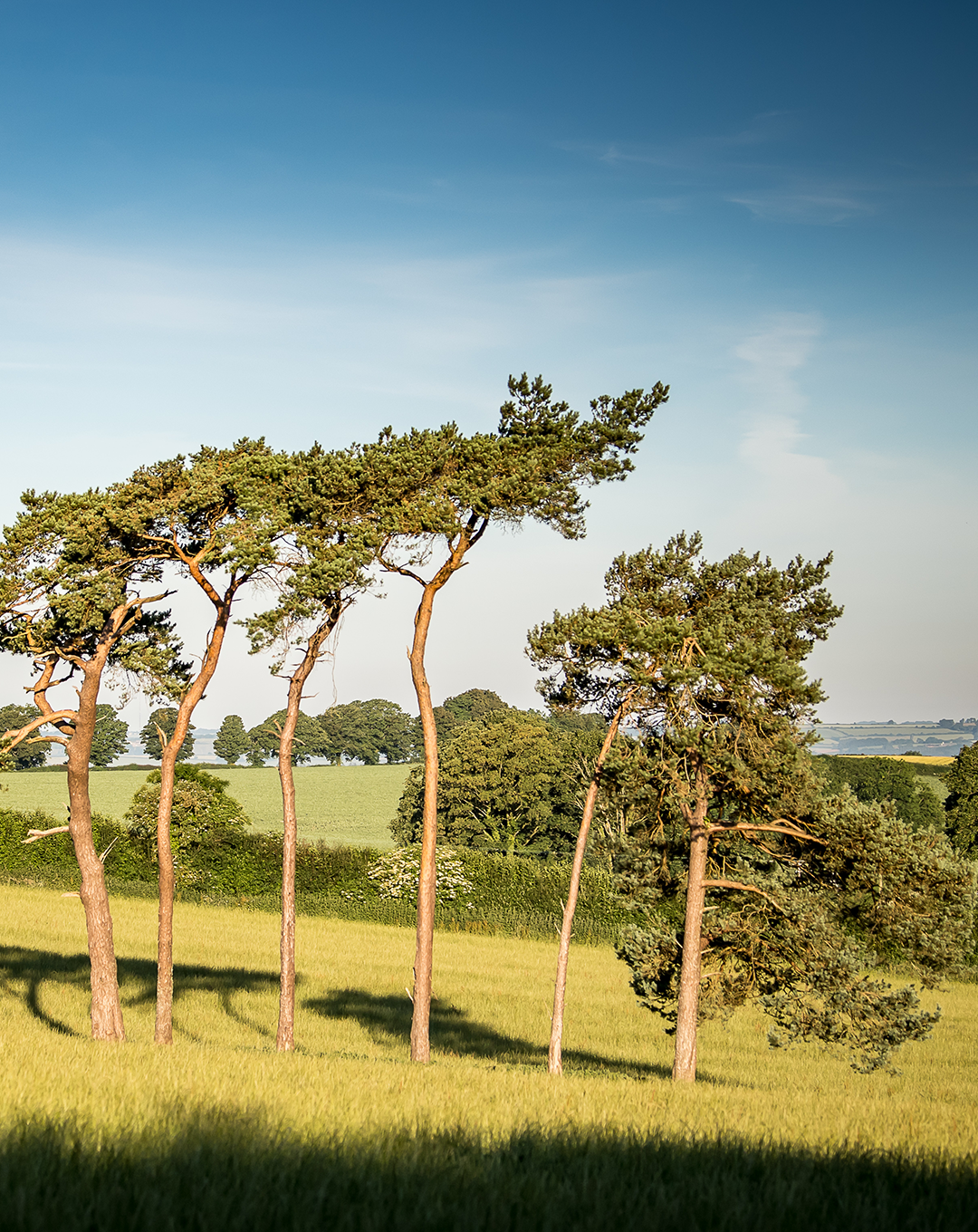 Coombe Farm Organic is rated 4.75 stars by Reviews.co.uk based on 2385 merchant reviews