If you’ve ever been to South Africa, or, indeed, ever met a South African, you’ll know that they LOVE biltong. It’s a bit of a national obsession, and though it’s taken a while, Britain is starting to understand why. Biltong is often likened to beef jerky, which is it’s nearest approximate equivalent. The two are similar, yes, though biltong tends to be cut more thickly and is distinctively flavoured by the salt and spices it’s cured with.

Like all dried meat, biltong was a product of necessity. Before refrigeration, salting and drying were the best ways to preserve meat. It was sheer good luck that this process created a palatable delicacy. The story goes that Dutch settlers took dried meat with them as they trekked from the Cape peninsula to discover new lands. This meat was an excellent (and vital) source of protein and, as the curing process luckily preserved vitamins and minerals, too, it was a good all-round staple to keep the settlers nourished.

These days, biltong is a treat rather than a staple. It’s most commonly eaten as a snack and is a great choice for lunchboxes as it fills you up and leaves you feeling satisfied. In contrast to many other snack foods, it isn’t fried and fatty, isn’t packed with sugar and is free from artificial flavours and colours. So it makes an excellent alternative to protein bars when you’re in need of an energy boost.

With a well-established and successful organic dairy, we started Coombe Farm Organic in 2015 hoping to make the most of the bi-products from the existing farming enterprise. We work really closely with Ryan, the Farm Manager and are incredibly proud of our award-winning Beef and Lamb. Now, also working with several other Soil Association certified farmers, we’re on a mission to bring you ethically raised, humanely slaughtered, skillfully butchered and flavoursome meat of exceptional quality - all year round.

Browse our range of biltong 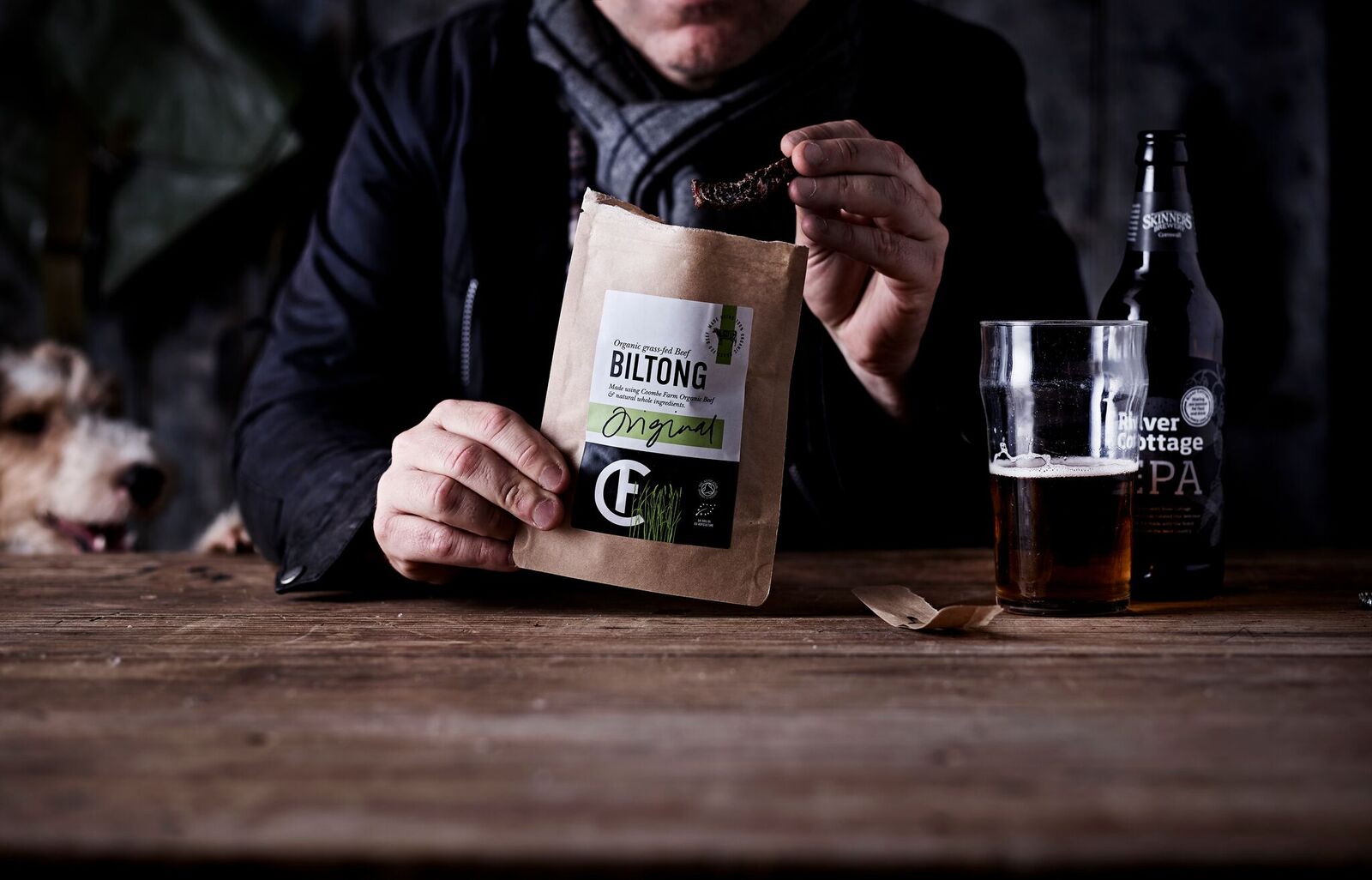 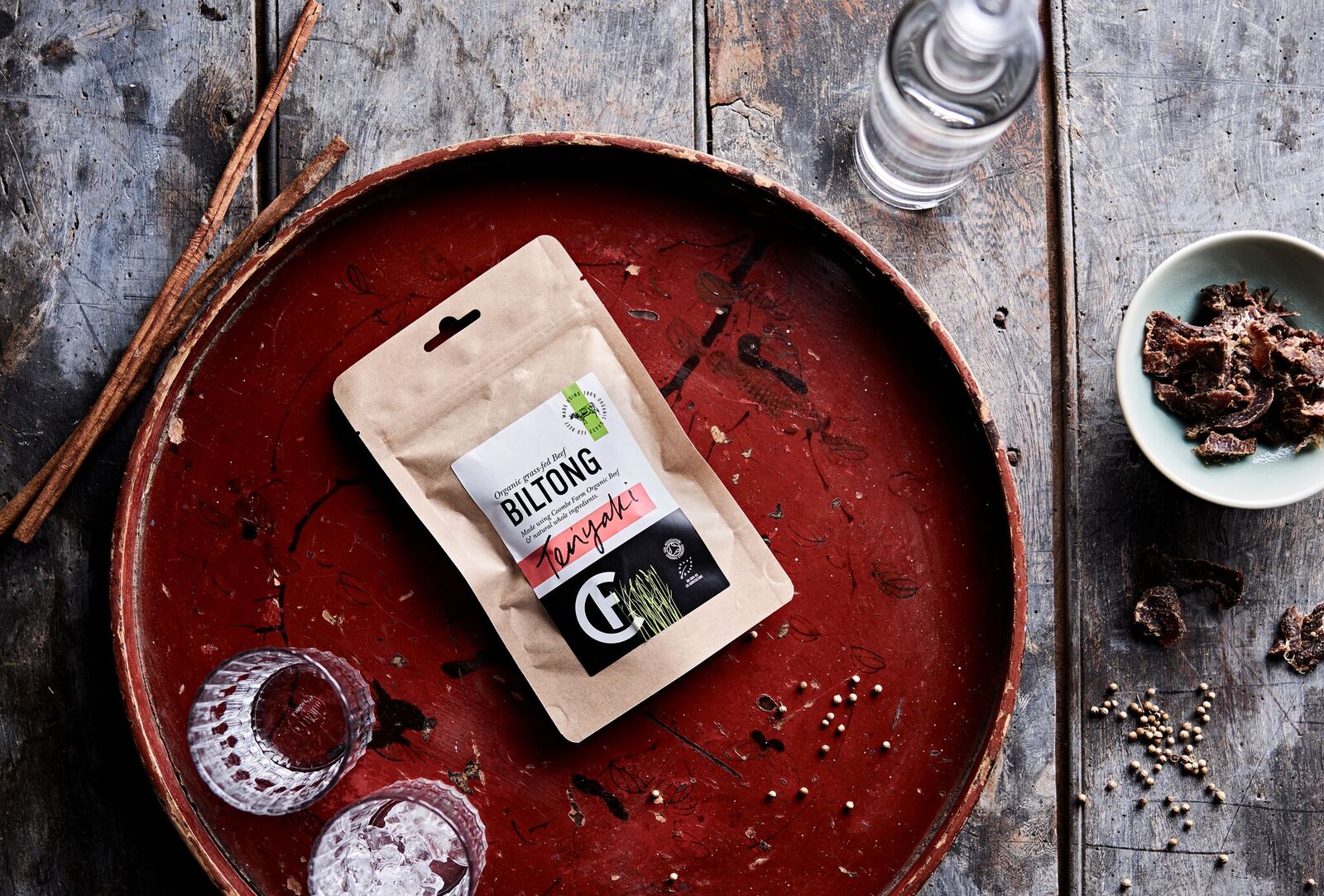 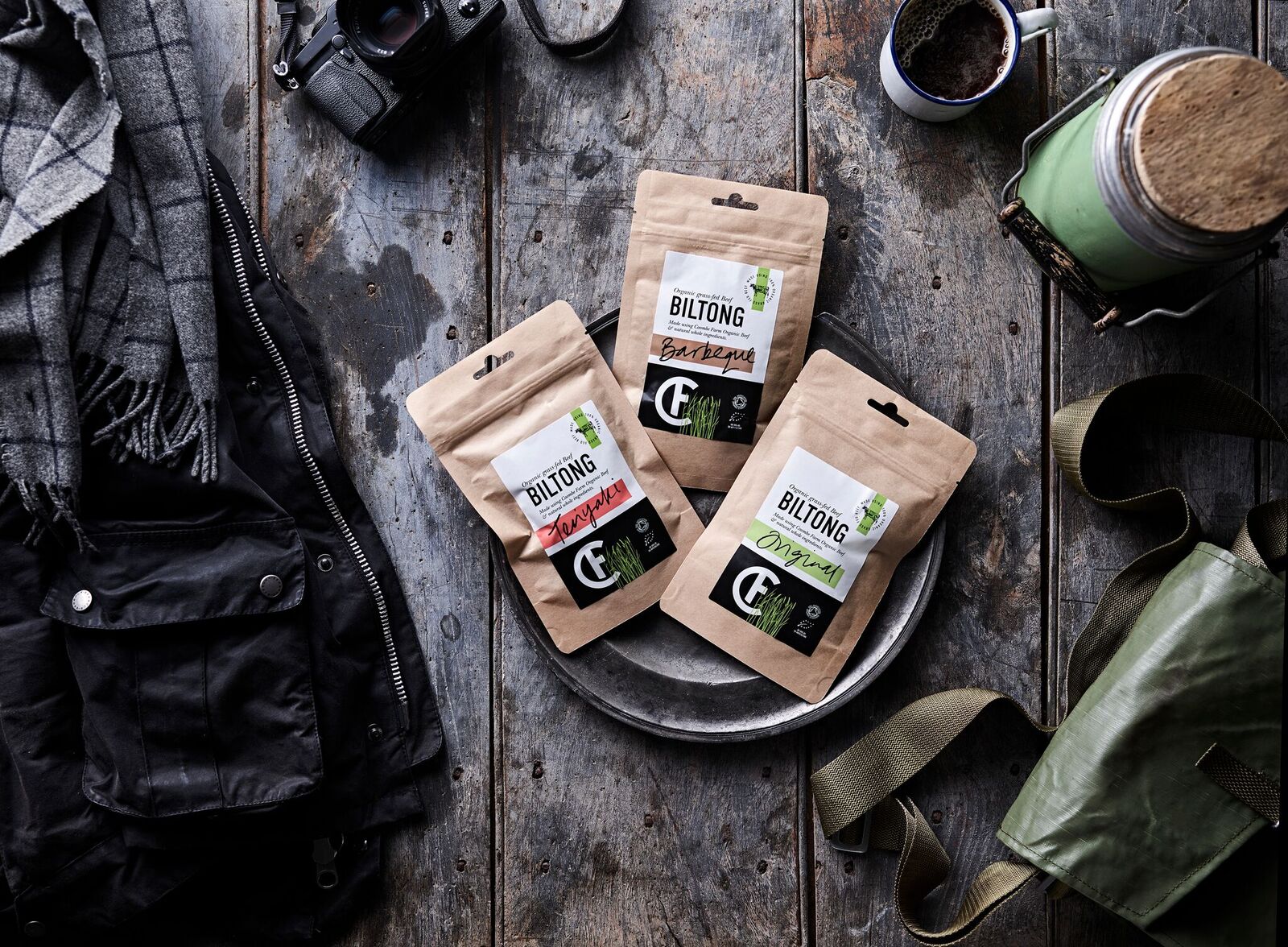 Why it's so good

The best biltong is made with patience. A salt cure, enhanced by the addition of coriander seed, nutmeg, cloves, black pepper and chilli, gets to work drawing the liquid out of the meat. The natural brine this creates disperses the spices throughout the joint, tenderises the meat and intensifies the flavour. Further concentration comes when the meat is fully dehydrated. Traditionally, it would be cut into strips, hung in the shade of a tree and allowed to dry in the arid African breeze. These days, we use a drying room, as reliably arid breezes are few and far between in Somerset.

You can enjoy your biltong when you’re on the go and in need of a tasty snack, nibble on it as you sip a cool beer or keep it in your store cupboard to be used as an ingredient in lots of other dishes. Stews, soups, casseroles and stuffings are all amped up by the inclusion of a bit of biltong. Versatile, delicious and nutritious? You can’t go wrong with that.

Our Organic biltong is available to order on this site. You can order it on its own (remembering we have a minimum order value of £40) or pop it into your basket alongside all of your other organic meat.

Alternatively, if you're a real biltong fanatic and have your heart set on biltong and biltong alone, visit www.cfobiltong.co.uk. Here you can stock up on as few or as many packs as you like, with no minimum order value.